You are here: Home / Interiors / Beauty & Function / Saying Goodbye to our Forever Home

This month marks exactly 1 year ago that our family moved to a new city and into a new home, so I thought it only fitting to share some pictures as I reminisce and say goodbye to the place I thought would be our forever home.

In fact, we only moved a mile and a half away from our very first home.  We were ecstatic because we had found the perfect place for our family (within our budget no less) where the kids could stay at the same school and where we would have more space.

It was over 0.3 acres on a corner lot with a large yard, 3800 total sq. feet, 7 bedrooms with beautiful hickory wood floors, a mudroom, walk-in shower, gigantic jetted tub in the master, brand new AC and heating system with a UV filter, vaulted ceilings, cold storage, RV parking, and room to expand in the basement.  I had waited years to have a home like that.  It was literally one of my dreams come true. 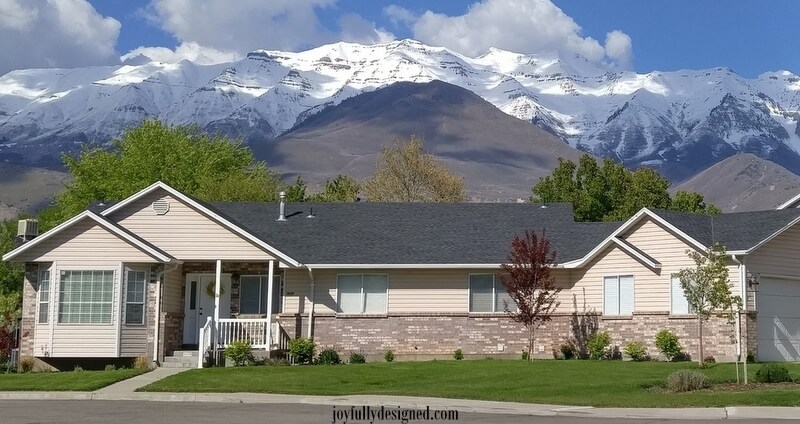 A year and a half later, we found ourselves in a dilemma.  My husband was hired for a job that we both hoped he would have one day.  It was significantly more stable than the contract position he previously had.

The only catch was that the position was located 2 hours from our home.  For some of you, that commute may not sound too bad, but for us it felt like traveling to another country.  Most likely he would be returning back to the same area after 3 years, so we talked about having him commute and just come home on the weekends.  After doing that for 2 months, we realized that it was not the best situation for our family (not to mention super stressful on everyone), so we decided to pack up and move.

One of the hardest parts of leaving was the fact that I didn’t get a chance to realize any of my envisioned projects for our forever home.

Here’s a glimpse of the major ones:  First, on the outside, I wanted to give the home a facelift from its peachy-tan exterior which screamed, “Hi, I was built in the 90’s!”  I thought some hardy board on the exterior mixed with decorative shingles would update it and spruce up the curb appeal.  Of course, that would involve changing the color as well.  I was thinking of going darker, possibly gray, or much lighter to perhaps white.  I also wanted to eventually update the windows so we didn’t have a weird grid versus no grid thing going on.  The first phase would have been to just paint the aluminum siding since a total remodel of the exterior would have been costly, so this project was on my very future to-do list. 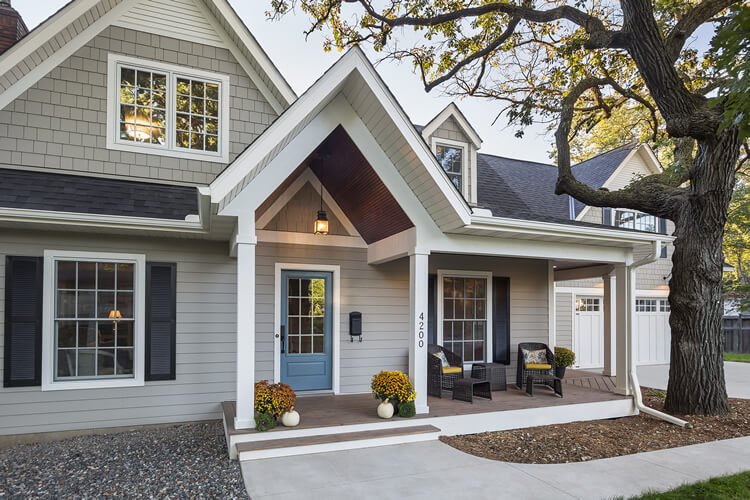 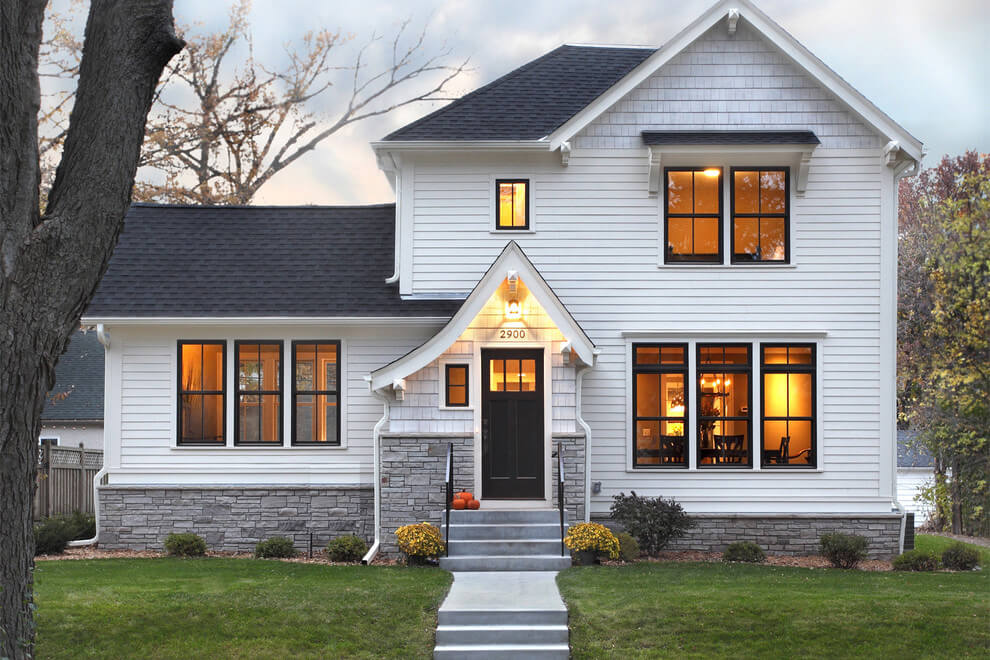 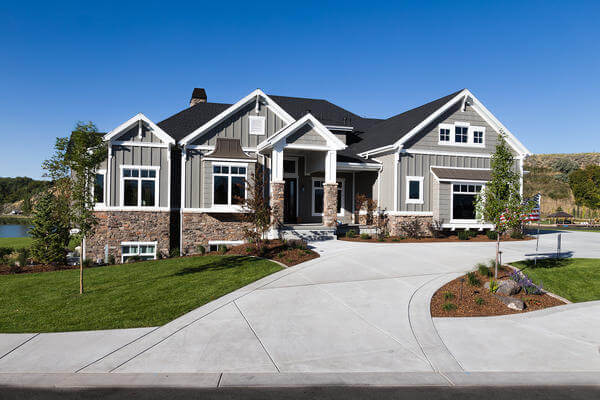 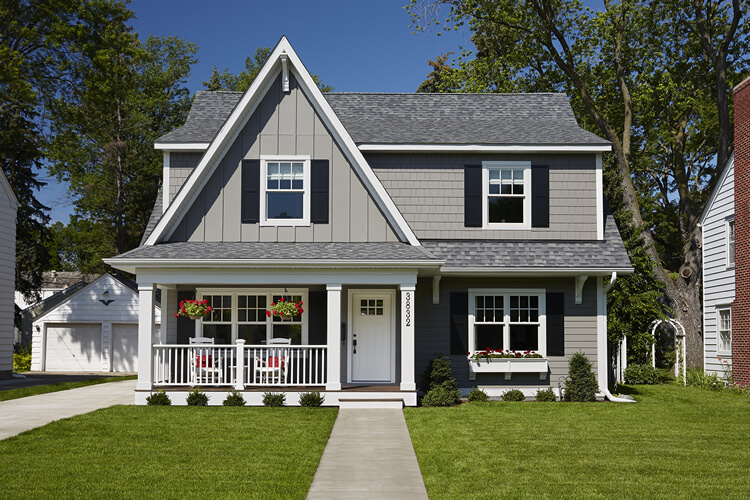 The first project I was planning to tackle was the fireplace.  I fell in love with this gas fireplace when I first looked at the home, and I really miss it (now that I don’t have one at all). 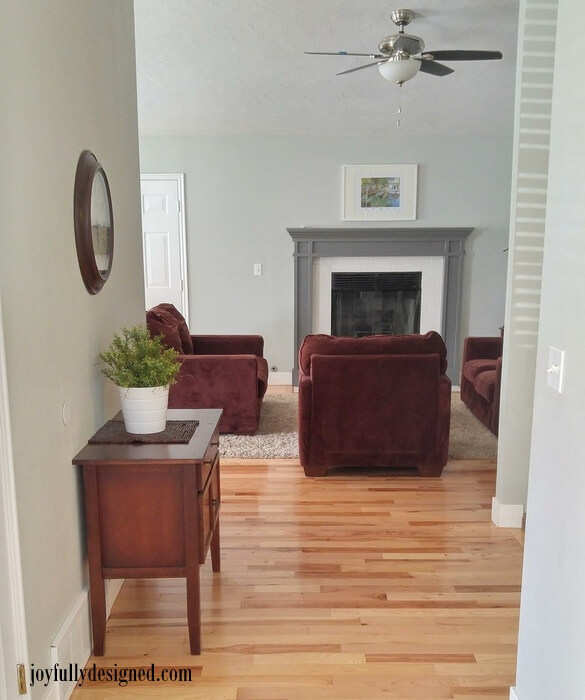 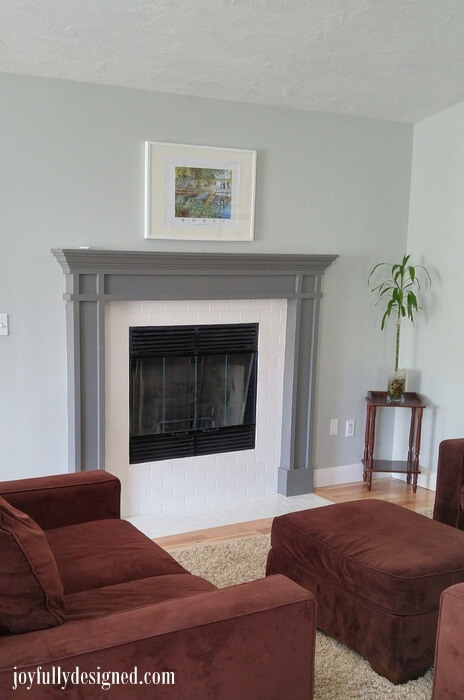 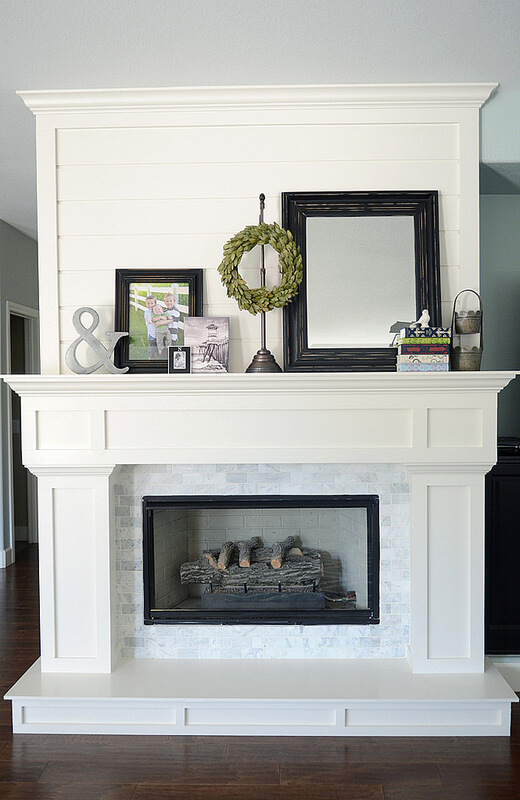 I also made a few adjustments to the mudroom and laundry while we lived there.  Here is the before pic which is a crazy mess… 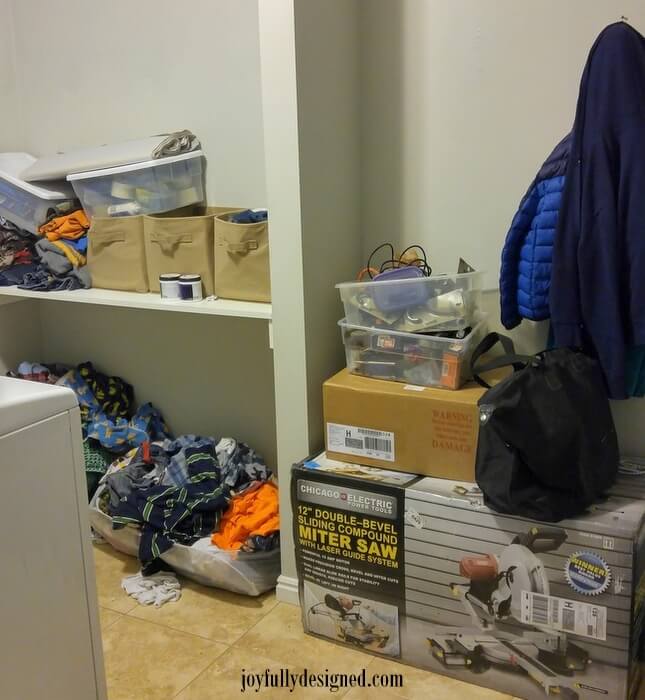 I finally got my patootie in gear and put some hooks up a few months before we moved. 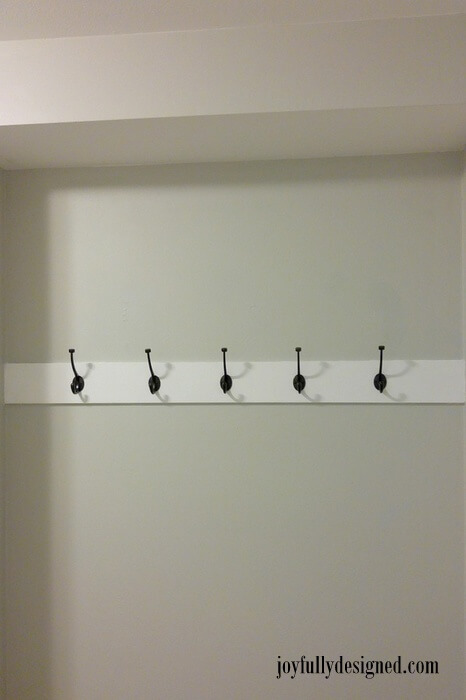 Still a dose of reality with my large family but much improved! 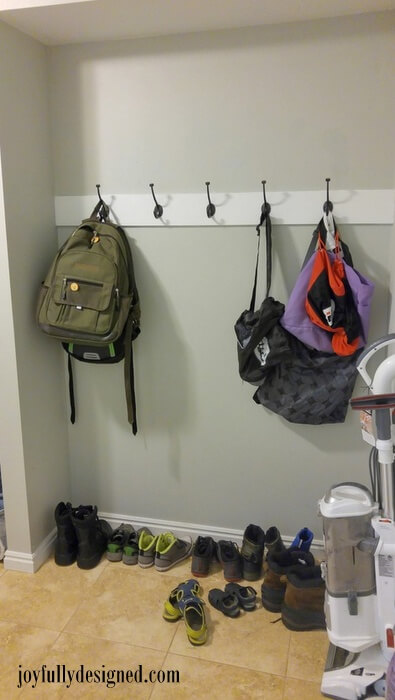 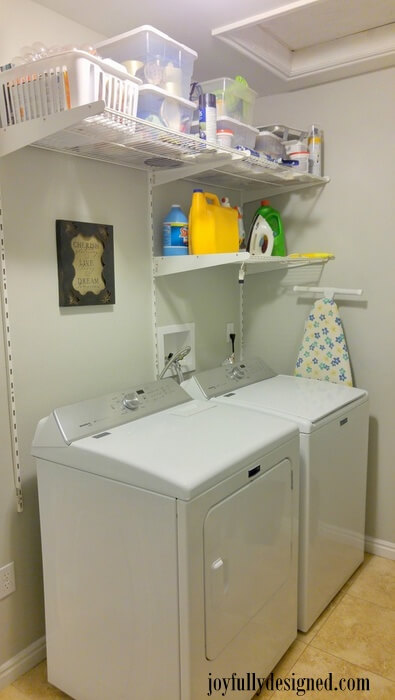 Again, here are some inspiration photos of what I had in mind for that space that I took during the Parade of Homes last year. 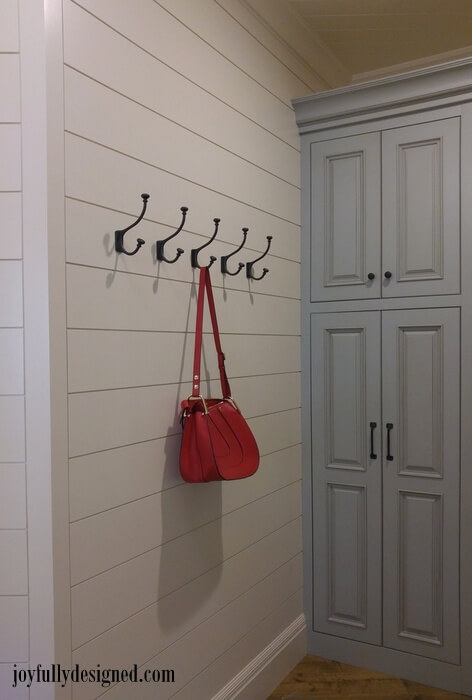 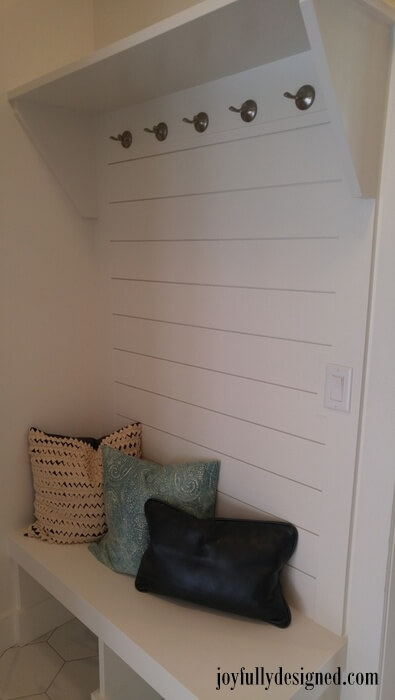 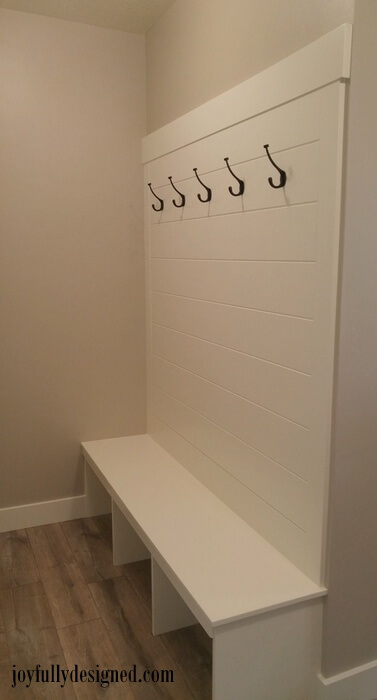 Other than décor, which I never fully got around to putting up, the last major project I was planning was in the basement.  Here is the family room how we had it. 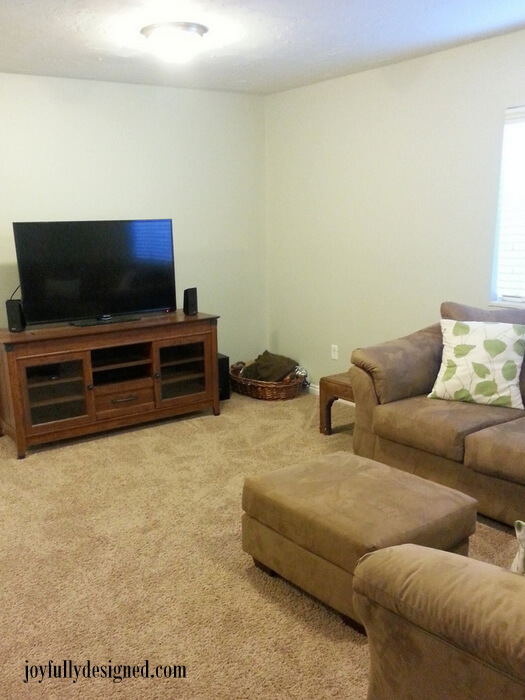 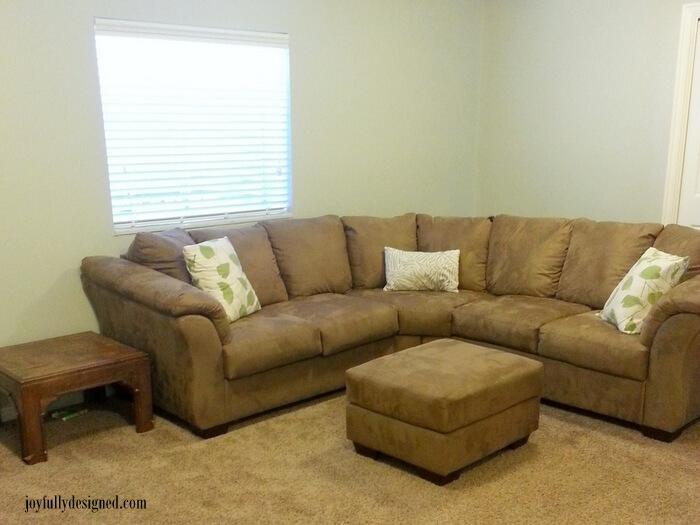 And the same room on that side empty… 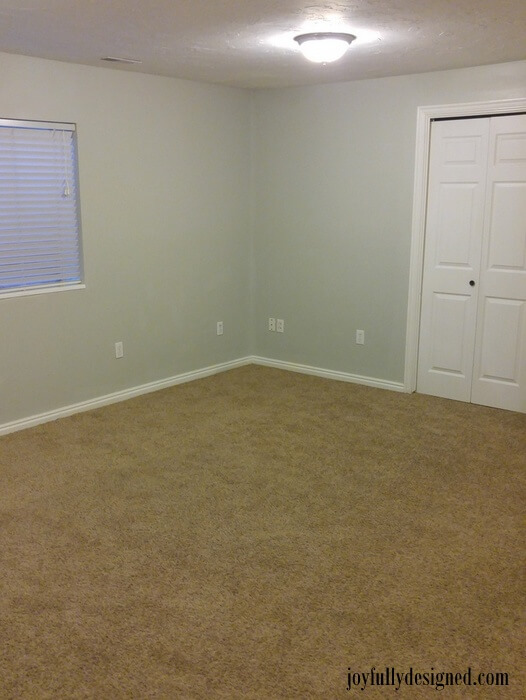 My plan was to flip the room around and put built-ins on this side of the wall where the closet is.  I would make that wall flush, place the closet opening near the bedroom door and then put built-ins along the wall similar to these next photos.

This one comes from Sarah at Thrifty Decor Chick.  I love her sense of style.  Her talent to bring creative ideas to life is amazing.  I have been following her blog since her dining room had chocolate brown walls.  I love these built-ins from her previous home. 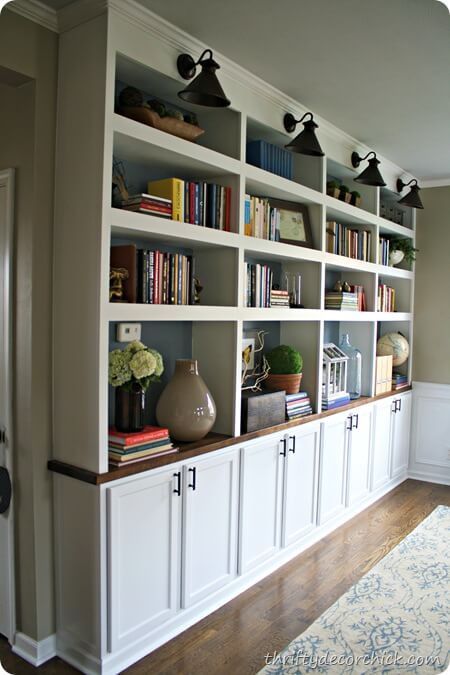 I also love these built-in bookshelves Robin and her husband added in their current home from Keep Home Simple. 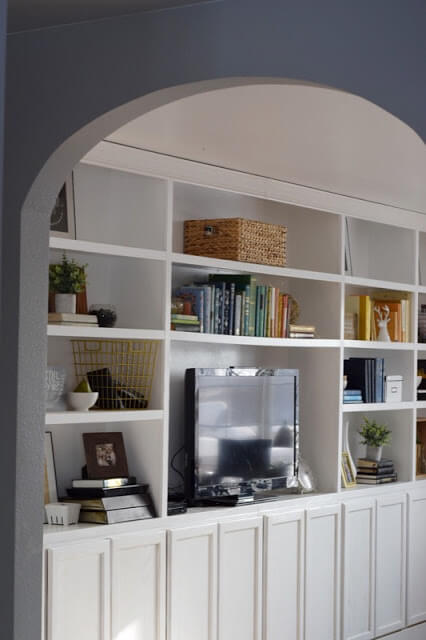 Next up, the master bathroom.  It was begging to be remodeled too.  It had good bones with a tiled walk-in shower and oversized jetted tub, but I never got the satisfaction of getting rid of all that pink. 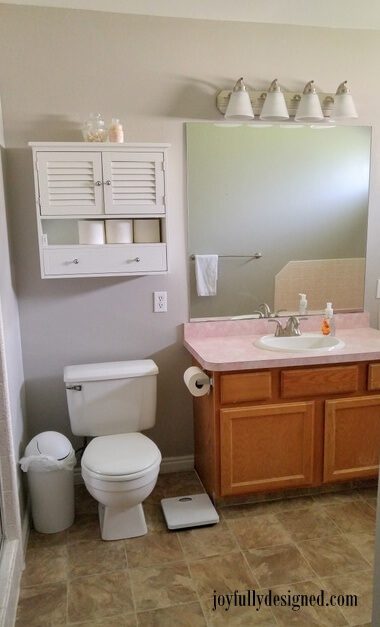 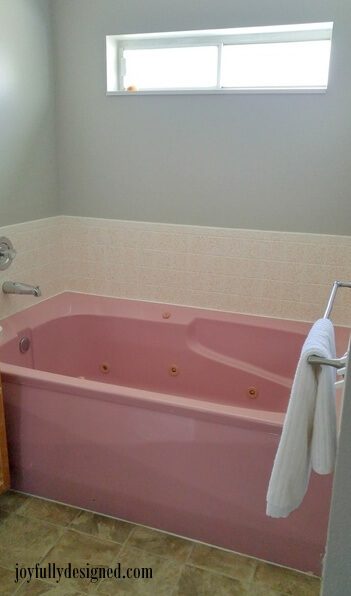 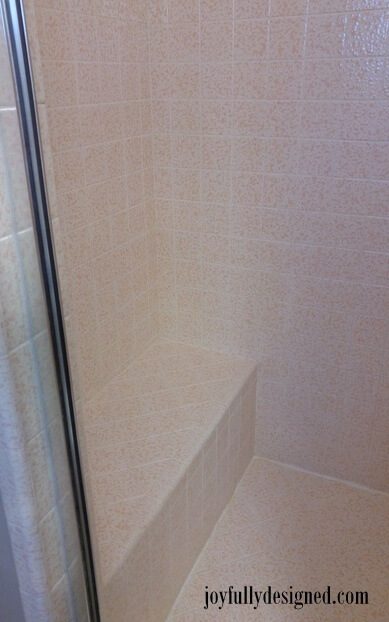 Here was my daydream for that project too (and still is in my current home as well). 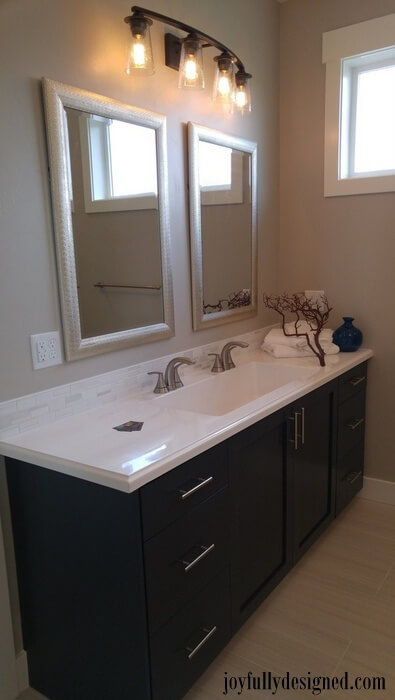 And more inspiration for the master bath.  I love the entire remodel of this house by the way! 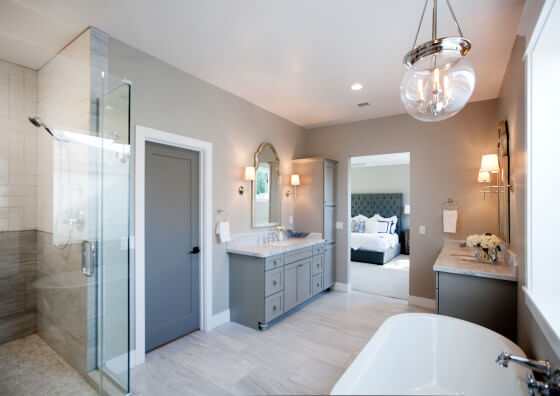 I could go on and on.  The fence needed work.  The patio could have been enlarged.  The kitchen would have benefited from an island, but alas, it’s time to stop looking back and time to move forward.

It was harder than I thought to say goodbye to our forever home and relocate to a new city (and give up those beautiful hardwood floors), but the one thing I’ve learned over the years is that a house is just a house.  The house doesn’t bring the happiness.  The people inside it do.  The feeling in your home is more important than what is hanging on your walls.  That is the really hard part of creating your dream home.

Having said that though, let me add that there is something genuinely fulfilling about decorating, refining, organizing, and loving your space, no matter if you live in a 1-bedroom apartment or a 3-story sprawling home.

So I’ll keep my eyes open and start working on the project list I have for the place I now call home.

« The Mindset You Need To Help You Move Forward
3 Spiritual Lessons From the Disney Movie, Moana »

Don't miss all the latest!